After a time of relaxation over the Christmas holidays, followed by an intense study period around the time of exams, the Scots College community reconvened for the second semester of classes last week. The start of the semester coincided with the 50th anniversary of one of the community’s best loved figures: Monsignor William Canon Clapperton, Rector of the College between 1922 and 1958.

A Life of Service

This thirty-six-year period of ministry as Rector is an impressive feat, and can only be considered even more so when it is known that before his stint as Rector of the College, Monsignor Clapperton had already been Vice-Rector for a number of years; a job that he was appointed to as soon as he had completed his own studies for the priesthood.

After his retirement in 1958, Clapperton was named a Canon of the Lateran Archbasilica, an honour conferred on him by Pope Saint John

XXIII. By the time of his death in  February 1969, Canon Clapperton had spent 62 years of his life in the Eternal City, during a period marked by WWII, six Pontificates and the Second Vatican Council.  Now buried in the College tomb in Campo Verano, Canon Clapperton is remembered continually in the prayers of students of the College.

In short, Canon Clapperton’s impact on the College was assured by the sheer breadth of time he spent in Rome. But over and above this, Clapperton was a much-loved and well-respected Rector. Memories of ‘the old Boss’ are very often still shared by jubilarians visiting the College around the time of St Andrews’ Day, furnishing students with a living-link to a well-known name. 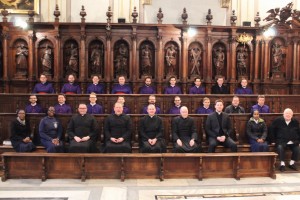 On Monday 18th February 2019, the College community celebrated Mass in the Lateran Archbasilica to remember and pray for Canon Clapperton on the day before his 50th anniversary. In attendance was one of his former students, Monsignor Charlie Burns, who has followed in the footsteps of Clapperton by exercising his ministry here in Rome for many years. It was a fitting way to recommence our studies, remembering a man who was so devoted to teaching and forming seminarians for their future ministries.